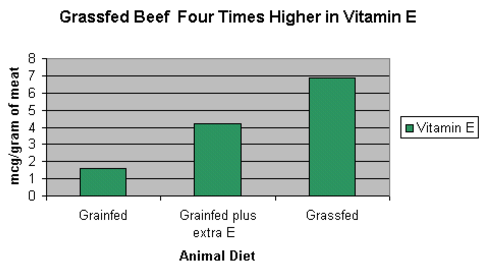 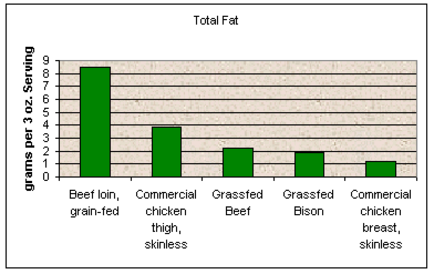 “Why Grass-fed is Best!” Lower in Fat and Calories. There are a number of nutritional differences between the meat of pasture-raised and feedlot-raised animals. To begin with, meat from grass-fed cattle, sheep, and bison is lower in total fat. If the meat is very lean, it can have one third as much fat as a similar cut from a grain-fed animal. In fact, as you can see by the graph below, grass-fed beef can have the same amount of fat as skinless chicken breast, wild deer, or elk. Research shows that lean beef actually lowers your "bad" LDL cholesterol levels. Because meat from grass-fed animals is lower in fat than meat from grain-fed animals, it is also lower in calories. (Fat has 9 calories per gram, compared with only 4 calories for protein and carbohydrates. The greater the fat content, the greater the number of calories.) As an example, a 6-ounce steak from a grass-finished steer can have 100 fewer calories than a 6-ounce steak from a grain-fed steer.  In the past few years, producers of grass-fed beef have been looking for ways to increase the amount of marbling in the meat so that consumers will have a more familiar product. But even these fatter cuts of grass-fed beef are lower in fat and calories than beef from grain-fed cattle. Extra Omega-3s. Meat from grass-fed animals has two to four times more omega-3 fatty acids than meat from grain- fed animals. Omega-3s are called "good fats" because they play a vital role in every cell and system in your body. For example, of all the fats, they are the most heart-friendly. People who have ample amounts of omega-3s in their diet are less likely to have high blood pressure or an irregular heartbeat. Remarkably, they are 50 percent less likely to suffer a heart attack. Omega-3s are essential for your brain as well. People with a diet rich in omega-3s are less likely to suffer from depression, schizophrenia, attention deficit disorder (hyperactivity), or Alzheimer's disease.

Another benefit of omega-3s is that they may reduce your risk of cancer. In animal studies, these essential fats have slowed the growth of a wide array of cancers and also kept them from spreading. Although the human research is in its infancy, researchers have shown that omega-3s can slow or even reverse the extreme weight loss that accompanies advanced cancer and also hasten recovery from surgery.

Omega-3s are most abundant in seafood and certain nuts and seeds such as flaxseeds and walnuts, but they are also found in animals raised on pasture. The reason is simple. Omega-3s are formed in the chloroplasts of green leaves and algae. Sixty percent of the fatty acids in grass are omega-3s. When cattle are taken off omega-3 rich grass and shipped to a feedlot to be fattened on omega-3 poor grain, they begin losing their store of this beneficial fat. Each day that an animal spends in the feedlot, its supply of omega-3s is diminished. The graph below illustrates this steady decline. When chickens are housed indoors and deprived of greens, their meat and eggs also become artificially low in omega-3s. Eggs from pastured hens can contain as much as 10 times more omega-3s than eggs from factory hens. [It has been estimated that only 40 percent of Americans consume an adequate supply of omega-3 fatty acids. Twenty percent have blood levels so low that they cannot be detected. The CLA Bonus. Meat and dairy products from grass-fed ruminants are the richest known source of another type of good fat called "conjugated linoleic acid" or CLA. When ruminants are raised on fresh pasture alone, their products contain from three to five times more CLA than products from animals fed conventional diets. (A steak from the most marbled grass-fed animals will have the most CLA ,as much of the CLA is stored in fat cells.) CLA may be one of our most potent defenses against cancer. In laboratory animals, a very small percentage of CLA—a mere 0.1 percent of total calories—greatly reduced tumor growth. [Vitamin E. In addition to being higher in omega-3s and CLA, meat from grass-fed animals is also higher in vitamin E. The graph below shows vitamin E levels in meat from: 1) feedlot cattle, 2) feedlot cattle given high doses of synthetic vitamin E (1,000 IU per day), and 3) cattle raised on fresh pasture with no added supplements. The meat from the pastured cattle is four times higher in vitamin E than the meat from the feedlot cattle and, interestingly, almost twice as high as the meat from the feedlot cattle given vitamin E supplements.  NY Times best selling author, Jo Robinson, has an informative book “Why Grass-fed is Best!” on the benefits of grass-fed beef. Please visit her web site at www.eatwild.com 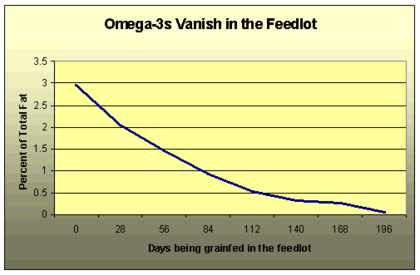